The Enhanced Multiple-Response Item: An Item Type for Next Generation NCLEX

Feb 5, 2021, 11:52 AM
<4-min. read> Testing nursing graduates for their licensure exam no longer needs to measure their ability to memorize long lists of facts. Instead, different item types are needed to measure clinical judgment.
“Students don't memorize — don’t need to memorize — 25 sets of drugs,” says Phil Dickison, PhD, RN, Chief Officer of the National Council of State Boards of Nursing (NCSBN) operations and examinations. “That's not how we work anymore. I have a reference library; I have a phone,” he explains. Students can simply type in a question “and see what the PDR might say about it or some other reference.”

Far more important than regurgitating data is being able to measure a graduate's clinical judgment skills. The Next Generation NCLEX — the name NCSBN has conferred on the project — will include new item types designed specifically for that task.

Dr. Dickison (below right in photo) discussed this topic during an interview with Sheryl Sommer, PhD, RN, CNE, ATI Vice President and Chief Nursing Officer (below center in photo). 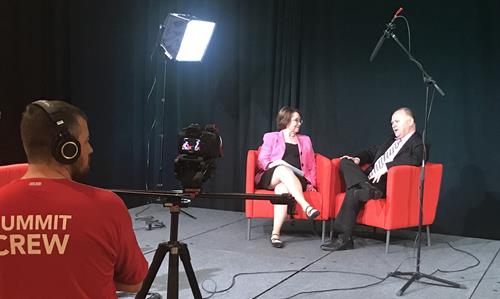 A Next Generation NCLEX item type

A better way to test graduates, albeit far more advanced, is to use an enhanced version of a multiple-response item type.

“What if you put a client history and the PDR for a medication side by side,” Dr. Dickison suggests. “Now ask an entry-level nurse why he or she would not give a medication that was ordered.”

The goal of such a question type: To test a novice nurse’s ability to say, “’Wait. We probably shouldn’t do this,’” Dr. Dickison says.

“We want them to be clinical thinkers and say, ‘There might be a problem here.’”

The test might highlight words in the PDR along with text describing client progress.

“That information would be the combination of reasons why you’d withhold that med,” Dr. Dickison explains. 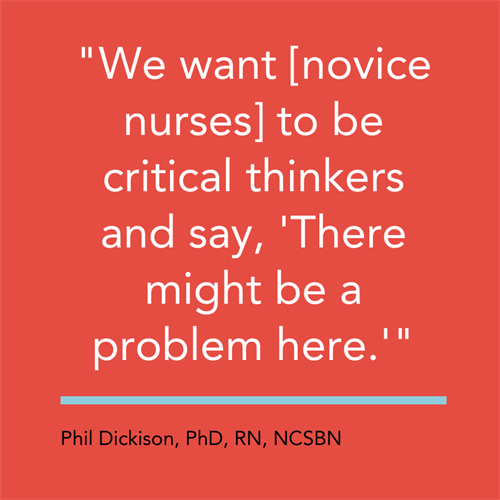 Dr. Dickison says one way to describe this new item type would be to imagine fusing a standard multiple-response question with a hot-spot question.

“Think of a multiple-response item now,” Dr. Dickison explains. “You might have a response set of 6 of which you pick 3. What if that response set were 22?”

He goes on: “You pick 7, and I pick 8of which we both get 6 right. You picked 1 wrong; I picked 2 wrong,” Dr. Dickison says. “We have to have a scoring mechanism that ensures your abilities are higher than mine. It can’t just be right or wrong, which is how we score items today.

“So even in our multiple-response now, if you had 3 correct responses, but you missed 1 of them, you get 0. If I didn’t pick any of them, I get 0.”

Dr. Dickison says NCSBN is working on overcoming the “right-or-wrong” scoring model in the Next Generation NCLEX. The exam needs to better measure students’ skills at clinical judgment and deliver more accurate information on their abilities.

“The other thing we’re looking at is breaking some of the rules that we’ve taught educators for years,” Dr. Dickison says, such as putting time constraints in an item type.

He offers another example for explanation: Imagine an item type in which the student clicks a series of radio buttons to view 30-minute increments of a client’s progress under a nurse’s care over 2 hours. The test asks the student to identify the point at which the nurse in the scenario made a mistake.

“We’ve all been taught that you don’t put negative stuff in an exam,” Dr. Dickison explains. But these types of questions tell us whether the student can think clinically. “They should be able to,” he says.

Specifically, as mentioned previously, students should be able to see a scenario and recognize when something is wrong, he says.

But the enhanced multiple-response item type shouldn’t end at that point, Dr. Dickison goes on. After all, the student could simply have gotten lucky in guessing the right answer.

“Now, you’ve got to add a short-response type-in,” Dr. Dickison says, describing how the test would require the student to key-in an answer describing what the nurse in the scenario did wrong. Next? The student must state what the nurse’s next step should have been.

Now, rather than a simple right-or-wrong answer on which to assess the student, Dr. Dickison explains, “You’ve got 3 pieces of information.

“It’s that more in-depth look that is really the sort of fidelity in how we operate,” Dr. Dickison adds.

But enhanced multiple response is only 1 of several item types NCSBN is developing. Others include extended drag-and-drop, cloze (select the missing word), enhanced hot spot, matrix/grid, and bowtie.


DO YOU HAVE QUESTIONS ABOUT ITEM TYPES? ASK THEM IN THE COMMENTS BELOW.